Need for Speed Wiki
Register
Don't have an account?
Sign In
Advertisement
in: Vehicles, Cars, Convertible,
and 15 more

1492 kg (3289 lbs)
Stub - Why not help by expanding this article with relevant information.

The Chevrolet Corvette Grand Sport (C6) is a convertible variation of the Corvette (C6). It was released in January 2010 with a folding soft top and body improvements seen on the Corvette Z06 (C6) model.

It was unveiled at the 12th annual Corvette Birthday Bash at the National Corvette Museum in Bowling Green, Kentucky.

It was released as a replacement for the Z51 package for the Corvette (C6). The Grand Sport model also incorporates a Z06 brake package featuring 14" front and 13.4" brake callipers.

The manual transmission includes a dry sump system and a launch control option seen on the Z06 model as well as the ZR1 mode at the price of $6,000.

The racer vehicle is unlocked upon the player earning a total of 105,000 racer bounty.

It is featured with an average acceleration and decent handling although its top speed is lacking compared to the rest of the series but it has strong nitrous power to compensate this.

The Corvette Grand Sport appears in Need for Speed: Hot Pursuit Remastered as a car tier 3 vehicle available to racers.

It performs very similar to the coupé Z06, but is not available as an SCPD unit. 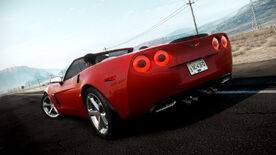