1496 kg (3298 lbs)
Stub - Why not help by expanding this article with relevant information.
The Chevrolet Corvette Stingray (C7) is the seventh generation Corvette from Chevrolet. It is the successor to the Corvette (C6) and is also the first Corvette to carry the Sting Ray name since the 1976 Corvette "Sting Ray" (C3).

The C7 was developed on a fresh blueprint and barely shares any parts with the previous generation models.

Some of the brand-new additions include the small block LT1 V8 engine, a 7-speed manual transmission, electric power steering, and a new chassis with aluminium base and carbon-fibre parts. The interior has also been revamped with extensive use of leather, new performance seats, and a fully electronic centre dashboard.

The model has an optional Z51 performance package available which features sharper chassis and transmission tuning, an electronic limited-slip differential, and an aerodynamic package with bigger wheels. The package is available as standard in the European market.

The Corvette Stingray (C7) appears in Need for Speed: Rivals as a racer vehicle and was first shown in the Gamescom 2013 trailer. 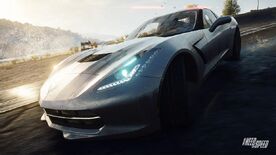 Need for Speed: Rivals
Retrieved from "https://nfs.fandom.com/wiki/Chevrolet_Corvette_Stingray_(C7)?oldid=138817"
Community content is available under CC-BY-SA unless otherwise noted.