The Challenger was first introduced as the limited production 2008 SRT8 model of which 6400 units were sold. In the following year, the SRT8 entered full-scale production and was complemented by additional models.[1]

Dodge equipped the SRT8 model with a 6.1 litre Hemi V8 engine that could be combined with a 5-speed automatic or 6-speed manual transmission as standard.

The car was replaced in 2012 by the Challenger SRT8 392 which features various upgrades including a larger displacement engine.

The Challenger SRT-8 is featured in Need for Speed: Nitro as a class A muscle car. It is rated 4 in both speed and strength; 2 in both acceleration and handling; and 3 in drifting.

Thiago, the top racer in Rio de Janeiro, drives a Challenger SRT-8 in all of the location's Gold Cup race events except for the Drift Challenge, Time Attack, and Speed Trap events.

Unlike his Type 2 and Charger R/T, a Challenger SRT-8 with a unique livery, instead of Thiago's Challenger, can be unlocked as a collectable car for use in both Arcade Mode and Career Mode, once all stars are obtained in all Rio de Janeiro Gold Cup events.

The Challenger SRT8 appears in Need for Speed: Hot Pursuit (2010) as an Performance Series racer vehicle, and as an SCPD Highway Patrol unit.

It is not as effective in race events as the 2010 Ford Shelby GT500, but is able to keep up with the Chevrolet Camaro SS and other Performance Series cars. The SRT8 can withstand most impacts due to its heavy mass, performing well in pursuits.

The Challenger SRT8 is featured in Need for Speed: The Run as a tier 2 vehicle that is available from the beginning.

It has a "very difficult" handling rating, but possesses strong acceleration and a high top speed.

The NFS Edition Challenger SRT8 is a tier 4 vehicle that is unlocked after earning a bronze medal in all Plains Interstate challenges.

The K&N Edition Challenger SRT8 is a tier 4 vehicle that is unlocked after earning a gold medal in all K&N challenges.

The Sinister signature edition Challenger SRT8 is a tier 5 vehicle that is unlocked upon beating 10 multiplayer objectives in the Car Battles Weekly Playlist.

The Challenger SRT8 appears in Need for Speed: Hot Pursuit Remastered as a car tier 2 vehicle available to cops and racers.

It may not be as effective in Race events as the Ford Shelby GT500, but is able to keep up with other cars in its tier, as well as withstand most impacts due to its heavy mass, performing well in Hot Pursuits.

The Challenger SRT8 is a Performance Series racer unlocked upon earning 195,000 racer bounty. 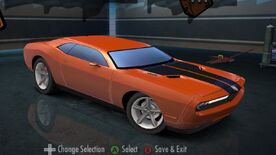 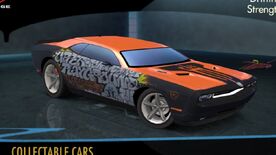 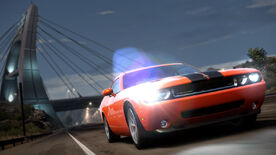 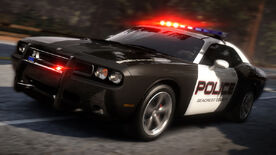 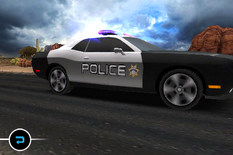 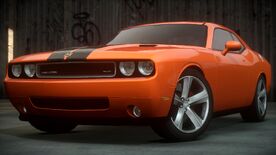 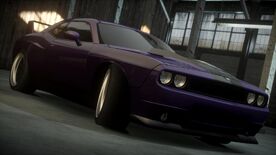 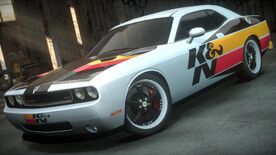 Retrieved from "https://nfs.fandom.com/wiki/Dodge_Challenger_SRT8?oldid=151861"
Community content is available under CC-BY-SA unless otherwise noted.