Need for Speed Wiki
Register
Don't have an account?
Sign In
Advertisement
in: Vehicles, Cars, Dodge,
and 12 more

Equipped with a supercharged 6.2-litre V8 producing 840 horsepower and 771 lb⋅ft of torque, the Demon owns the title of world's most powerful production V8. Making it the first of Dodge's production drag cars.

Alongside performance alterations, the Demon is 97.5 kg lighter than the next most powerful trim, the Challenger Hellcat, and that is down to the Demon being aggressively lighted to the extent of only having a front driver seat stock.

The front passenger seat and rear seats can be fitted from the factory at the price of $1 each, although the four-piston calipers, smaller disc brakes, and smaller hollow anti-roll bars can not be replaced with the larger components of the Challenger.

Even though the Demon is sold as a production drag car, the National Hot Rod Association in the United States of American has banned it from competition due to it not being equipped with an NHRA certified roll cage required for 'under 10 second' cars, and additional drag components require an optional $1 add-on; the Demon Crate.

The Challenger SRT Demon appears in Need for Speed: No Limits as part of a "Unleashed" special event that took place from August 11, 2017 to August 18, 2017. The starting performance rating is 563.

The Challenger SRT Demon is a muscle class car that requires 15 epic blueprints to unlock. The blueprints required to unlock the vehicle can be found from various sources: 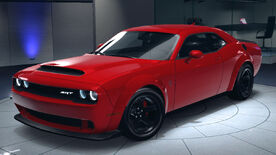