There are two models of the Civic Cruiser; the standard issue model fitted with a full police package and the unmarked Undercover Cruiser.

The local police unit is fairly light and flimsy resulting in an ineffective means of pursuit against high durability vehicles.

The power mixed with torque produced by the engine can become too excessive at low speeds and result in very little grip.

The Dodge Charger SRT8 Super Bee Civic Cruiser appears in Need for Speed: World as a police vehicle, and is utilised by the Palmont Police Department as a heat level 1 response vehicle.

It also drove around the map, and ramming it caused the players to initiate a pursuit, but following the November 16, 2011 update, the unit stopped appearing on the streets in favour of Pursuit Outrun events. 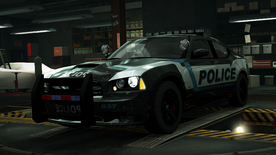