Need for Speed Wiki
Register
Don't have an account?
Sign In
Advertisement
in: Vehicles, Cars, Dodge,
and 14 more

It could be bought with either a 2.0L (A588) SOHC and (ECC) DOHC inline-four engine, although the power output of either engine ranged between 100 and 200 horsepower.

The Neon is available at the beginning of Need for Speed: Underground for $8,500 alongside the Mazda MX-5 and a few other cars.

The Neon's main strength is top speed. It has a slight hint of understeer, and the acceleration is on par with the Volkswagen Golf GTI. It can also be one of the fastest accelerating cars once it has been fully upgraded.

Klutch, a storyline character, can be seen driving a green Dodge Neon.

The Neon can be found in the game files of Need for Speed: Underground 2 with vinyl, manufacturer, and secondary logo textures referencing the car.

The Neon appears in Need for Speed: Underground Rivals and can be acquired for $17,000. 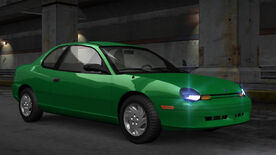 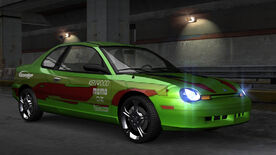 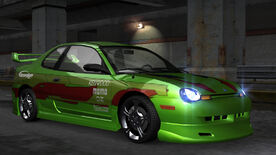 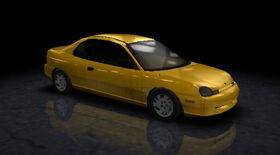