Need for Speed Wiki
Register
Don't have an account?
Sign In
Advertisement
in: Vehicles, Cars, Dodge,
and 11 more

Production of the two seat sports car began at the New Mack Assembly in 1992 and moved to the Conner Avenue Assembly in October 1995.

The 1st Generation Dodge Viper debuted in 1991 with two pre-production models set to be used as pace cars for the Indianapolis 500. Dodge was forced to substitute it in place of the Japanese-built Stealth because of complaints from the United Auto Workers, but the Viper still went on sale in January 1992 as the RT/10 Roadster.

The RT/10 was fitted with a V10 engine based on the design of the Chrysler LA although the design was meant for use in trucks. The design made the engine too heavy to be used effectively in a sports car, but the engine was altered by Lamborghini as they were owned by the Chrysler Corporation at the time.

Further modifications were planned for the engine, but these were dropped after Chrysler became concerned with the uncertain production costs and sales potential of the RT/10.

The Viper RT/10 appears in The Need for Speed as a class B vehicle that is noted for its acceleration and handling, but also for its low top speed. 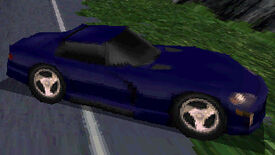