Need for Speed Wiki
Register
Don't have an account?
Sign In
Advertisement
in: Vehicles, Cars, Dodge,
and 17 more

It features much more drastic upgrades compared to the first ACR. These include street-legal racing tyres, two-piece brake rotors, adjustable suspension and a significant aerodynamic revision.

The engine was not modified in any manner making it identical to the SRT-10 Coupé in terms of horsepower and torque output. A 2010 Viper SRT-10 ACR lapped the Nordschleife course of the Nürburgring with a time of 7:12.13.

The Elite SRT-10 ACR design is associated with high speed police pursuits vehicles. This design is heavily orientated towards police strobe lighting high speed performance. It is the second Elite model to feature a loudspeaker function and the first to feature toggleable police lights. Pressing "K" will play a police siren that can be heard by all players and pressing "L" will toggle the police lights.

The SRT-10 ACR is capable of out accelerating multiple Class A vehicles due to it coming equipped with Medion tuned-pro performance parts. It is best suited towards an acceleration and handling bias performance parts. The handling of the ACR is heavy and will imply understeer at high speeds but is more than capable of sustaining the ACR at moderate speeds through complex course sections.

The body kit for the ACR is much wider than the standard Dodge Viper SRT-10 and features many air ducts so that the Elite Cop can sustain adequate grip at high speeds. It is also fitted with a large rear spoiler and a police strobe lights on multiple body panels including the roof.

The Elite style is a uniquely altered elite variation of the regular Viper SRT-10 ACR. It is altered to the style of a high-speed police interceptor and costs

The Elite style is a uniquely altered elite variation of the regular Viper SRT-10 ACR. It is altered to the style of a high-speed police interceptor and costs

The Viper SRT-10 ACR appears in Need for Speed: Hot Pursuit (2010) as an Exotic Series racer vehicle, and as an SCPD Speed Enforcement unit.

Despite the low top speed, the ACR is considered as one of the best Exotic Series cars alongside the Mercedes-Benz SLR McLaren Stirling Moss Edition due to its strong nitrous, drifting ability and great speed recovery.

The SCPD ACR is also well-regarded as one of the best Speed Enforcement cars. Due to its handling characteristics, the ACR is generally more suited to racing routes consisting lots of long and wide high-speed turns.

The Viper SRT-10 ACR appears in Need for Speed: Hot Pursuit Remastered as a car tier 4 vehicle available to cops and racers.

It has a low top speed for its tier but its strong nitrous boost, quick acceleration, and ability to maintain speed through corners allow it recover speed at a faster rate. 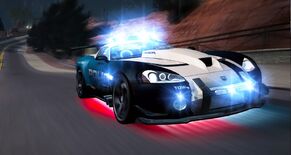 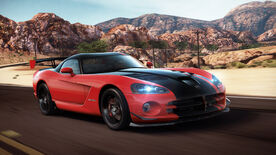 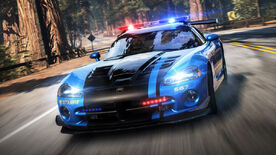