Need for Speed Wiki
Register
Don't have an account?
Sign In
Advertisement
in: Vehicles, Cars, Fictional,
and 12 more

The Dodge Viper SRT-10 Federal Undercover Cruiser is utilised by the Tri-City Bay Police Department (TCBPD) in the PlayStation 2 and Nintendo Wii releases of Need for Speed: Undercover. Much like Sergeant Cross' Chevrolet Corvette C6, it appears very rarely in a pursuit, with only one unit at a time. 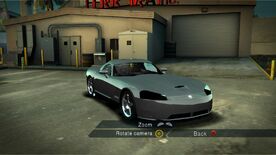