Need for Speed Wiki
Register
Don't have an account?
Sign In
Advertisement
in: Vehicles, Cars, Convertible,
and 16 more

1561 kg (3441 lbs)
Stub - Why not help by expanding this article with relevant information.

The Final Edition variants feature the same performance criteria as the models that they are based on but feature additional exterior modifications.

The racer vehicle is unlocked at the beginning of the player's career. It was made available as part of the first free multiplayer update for PlayStation 3 and Xbox 360 released on December 21, 2010, as well as patch 1.020 for PC on January 20, 2011.

It is fast and nimble with a high top speed. Durability is pretty high, and it handles well, although it can tend to oversteer through corners.

It performs very similar to the coupé Viper SRT-10, but is not available as an SCPD unit. 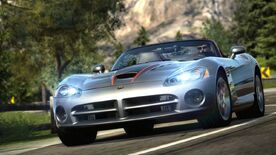