Need for Speed Wiki
Register
Don't have an account?
Sign In
Advertisement
in: Vehicles, Cars, Police,
and 16 more

1265 kg (2789 lbs)
The Eagle Talon TSi is a sports coupe that was manufactured and sold by Chrysler Corporation and Mitsubishi Motors of Japan between 1990 to 1999 in a joint corporate venture known as Diamond-Star Motors (DSM).

The Talon was sold under the Eagle marque, a brand developed by Chrysler to compete with Japanese imports in the late 1980s. It is a re-badged model of the Mitsubishi Eclipse GS, Eclipse GS-T, and Eclipse GSX. The Talon was offered in numerous trims including; TSi, TSi AWD, DL and ES.

The second generation model is the only Eagle Talon featured in the Need for Speed series.

The Talon appears in Need for Speed III: Hot Pursuit as a police pursuit vehicle. It can be unlocked by entering the cheat code "go18" at the main menu.

It patrols on the Redrock Ridge and Lost Canyons courses in the PC release, but only spawns on the Empire City course in the PlayStation release.

The Talon appears in Need for Speed: High Stakes as a police vehicle with a black and white colour scheme.

In the PC release, it can be driven by a player if they switch police cars with the A.I. cops. It patrols the Redrock Ridge and Lost Canyons courses. 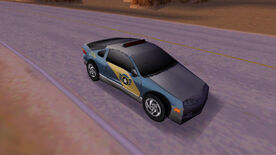 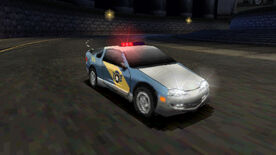