Need for Speed Wiki
Register
Don't have an account?
Sign In
Advertisement
in: Vehicles, 1980s, Ferrari,
and 12 more

Introduced in 1989 as the successor to the 328, the 348 was initially made available in coupé "TB" (Trasversale Berlinetta) and targa "TS" (Trasversale Spider) body types.

The pininfarina-styled body combines styling cues from the Testarossa along the flanks and rear treatment, with cues from classic models of the past, such as the front-end treatment reminiscent of the 375 MM.

It is powered by a longitudinally-mounted 3.4-litre V8 engine producing 300 bhp (221 kW) and mated to a transverse gearbox. It is also the first model announced by the company subsequent to the death of Enzo Ferrari. 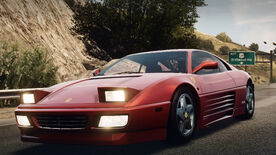