Designed by famous car designer Pininfarina whom was also responsible for the design of the 288 GTO and Testarossa, the 360 Spider was unveiled at the 2000 Geneva Motor Show as the open top variant of the 360 Modena.

The Spider was designed with increased structural rigidity in mind overall, with work done on the chassis, reinforced sills, front part of the floors and windshield structure, resulting in the 360 Spider weighting only 60kg (130 lbs) more than the Modena. It also has a top which folds away automatically as well as roll-bars.

It shares the same engine used in the 360 Modena, a mid-mounted 3586cc V8 coupled with a longitudinal gearbox in unit with the differential.

The Spider variant was the best selling model of the Ferrari 360 lineup.

The Ferrari 360 Spider appears in Need for Speed: Hot Pursuit 2 as a tier 3 vehicle that is unlocked upon earning 10,000 NFS Points.

It appears in the PlayStation 2 release as a class C vehicle that is unlocked upon the player completing Championship Event 16 - Ferrari 360 Sprint. Players can drive it using cockpit camera in Event 32 - Hot Pursuit 2 Championship Duel.

The NFS Edition is unlocked upon earning 20,000 NFS Points but is only available in the GameCube, PC, and Xbox releases. 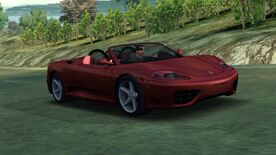 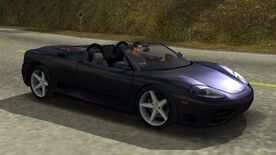 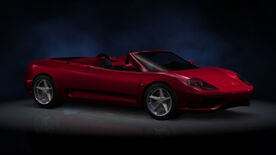 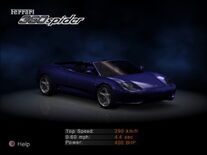