1350 kg (2976 lbs)
The Ferrari 430 Scuderia is engineered by Ferrari to compete with track-ready street machines like the Porsche 911 GT3 RS and the Lamborghini Gallardo Superleggera.

The Scuderia boasts some interesting new technology under the hood with a rebuilt intake, exhaust system and an ion-sensing knock-detection system that allows for a higher compression ratio.

The Scuderia was originally unveiled by Formula One legend Michael Schumacher at the 2007 Frankfurt Auto Show in Germany. Its semi-automatic transmission features a piece of software that allows the transmission to shift in 60 milliseconds.

The F430 Scuderia appears in Need for Speed: Shift as part of the downloadable Ferrari Racing Pack for the Xbox 360 release. 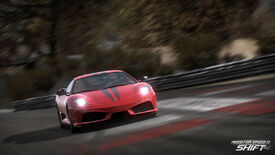 Retrieved from "https://nfs.fandom.com/wiki/Ferrari_430_Scuderia?oldid=139069"
Community content is available under CC-BY-SA unless otherwise noted.