Need for Speed Wiki
Register
Don't have an account?
Sign In
Advertisement
in: Vehicles, Cars, Ferrari,
and 13 more

The M in its name stands for Modificata, or "Modified" in Italian, as it is an updated version of the Ferrari 456 produced between 1992 and 1997.

The 456 M GT appears in Need for Speed III: Hot Pursuit with a class B rating, and is a downloadable add-on car for the PC release.

The 456 M GT can be selected with a 6-speed manual or 4-speed automatic transmission, with the manual offering better performance. 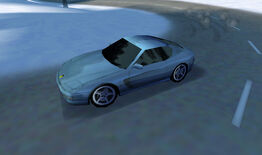