Need for Speed Wiki
Register
Don't have an account?
Sign In
Advertisement
in: Vehicles, 1990s, Ferrari,
and 11 more
English

Compared to the Testarossa, the 512 TR received minor changes, such as lowered centre of gravity for better handling, redesigned interior for better ergonomics, and facelifted exterior for better aerodynamics, which was followed by improvements with its engine and gearbox.

The car's name was composed of "5" which refers to the engine's cubic capacity and "12" referring to the number of cylinders, whilst the "TR" was an abbreviation of Testarossa.

The 512TR appears in The Need for Speed.

In all releases, following the 3DO original release, it is grouped in Class A alongside the Lamborghini Diablo VT. It has best handing in its class, although it is not as quick.

It can only be selected with a red body colour although, in the PlayStation and Sega Saturn releases, it can appear in yellow when driven by A.I. and split-screen opponents. 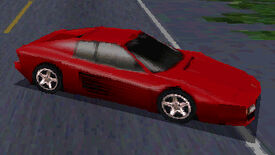 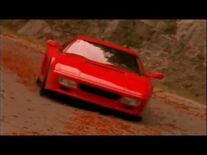