1690 kg (3726 lbs)
The Ferrari 550 Barchetta is a roadster produced by Ferrari between 2000 and 2001. It was unveiled at the 2000 Paris Motor Show and did not feature a convertible roof but rather a traditional roadster soft top.

A total of 448 550 Barchettas were produced followed by ten prototypes that were only distinguishable from previous production models by an interior plaque numbered between P01 to P10.

The 550 Barchetta appears in Need for Speed: Hot Pursuit 2 as a tier 2 vehicle in the PC, GameCube, and Xbox releases that is unlocked upon earning 30,000 NFS Points.

It also appears in the PlayStation 2 release as a class C car that is unlocked upon earning 200,000 NFS Points. Players can drive it using cockpit camera in Hot Pursuit Event 31 - Ferrari 550 Endurance Race. 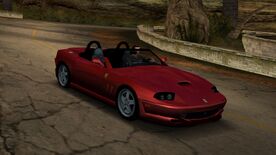 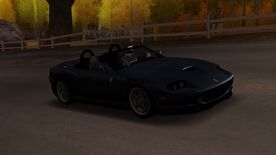 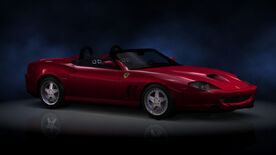 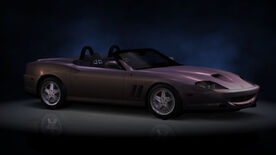