It is a convertible version of the original Ferrari 575M Maranello. Introduced in 2005, features an electrochromic glass panel roof which rotated 180° (both are production car firsts) at the rear to lie flat over the boot.

The 575 Superamerica appears in appears in Need for Speed: Shift as a tier 4 car with a price tag of $250,000. It's included as part of the downloadable Ferrari Racing Pack for the Xbox 360 release. 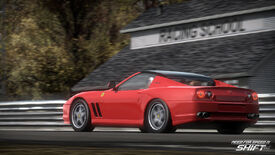