Need for Speed Wiki
Register
Don't have an account?
Sign In
Advertisement
in: Vehicles, Cars, Ferrari,
and 12 more

Styled by Pininfarina under the direction of Ferrari's Frank Stephenson, the 599 GTB debuted at the Geneva Motor Show in February 2006. Its name came from its engine displacement, Gran Turismo Berlinetta nature, and Ferrari's Fiorano test track.

Unlike its predecessor, the 599 was built from scratch and had various new features including a modified variant of Enzo's 6.0L V12 engine, a Formula 1 derived traction control system, advanced suspensions, and an option for a sequential gearbox and carbon ceramic brakes.

The 599 GTB appears in Need for Speed: Shift as part of the downloadable Ferrari Racing Pack for the Xbox 360 release. 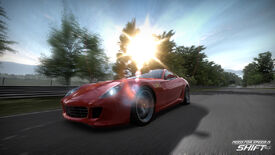