[1][2]
The Ferrari 812 Superfast is an exotic sports car produced by Italian sports car manufacturer Ferrari as the successor to Ferrari F12berlinetta, and made its debut at the 2017 Geneva Motor Show.

It is the first Ferrari vehicle equipped with EPS (Electric Power Steering), a system used to fully optimise its performance and complete integration with all electronic vehicle dynamic controls.

Two other driver aids added to the Superfast - the SSC (Side Slip Control) and Virtual Short Wheelbase 2.0 system (PCV) - allows for greater control at high speed as well as improving the nimbleness of the handling whilst reducing response times.

For exterior appearance, it is painted with a unique new colour named "Rosso Settanta" to mark the company's 70th anniversary celebration.

The Ferrari 812 Superfast appears in Need for Speed: No Limits as the part of "Frights, Camera, Traction!" update and features in a "Proving Grounds" special event, which first took place from October 31, 2017 to November 11, 2017[3]. The starting overall performance rating is 696 PR.

The Ferrari 812 Superfast is a Super class car that requires 60 legendary blueprints to build, of which can be found from various sources:

It becomes available as a loaner vehicle upon entering the "Proving Grounds" special event, and is unlocked after all 7 chapters of the event have been completed. 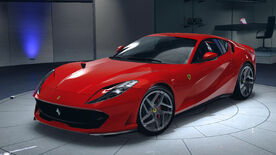 Retrieved from "https://nfs.fandom.com/wiki/Ferrari_812_Superfast?oldid=141350"
Community content is available under CC-BY-SA unless otherwise noted.