Need for Speed Wiki
Register
Don't have an account?
Sign In
Advertisement
in: Vehicles, 2000s, Ferrari,
and 14 more

7-speed Automatic
1,630 kg (3,594 lbs)
Stub - Why not help by expanding this article with relevant information.

The 2008 Ferrari California (F149) is a grand touring sports car that was launched by Ferrari at the 2008 Paris Motor Show. It is a two door "2+2" hard top convertible.

The car revives the "California" name used for the late-1950s Ferrari 250 GT. It was the first Ferrari to use a dual-clutch 7-speed transmission and front-mounted V8 engine.

It was replaced by a turbocharge facelifted model, the Ferrari California T, in 2014.

The Ferrari California appears in appears in Need for Speed: Shift as a tier 2 car with a price tag of $185,000. It's included as part of the downloadable Ferrari Racing Pack for the Xbox 360 release. 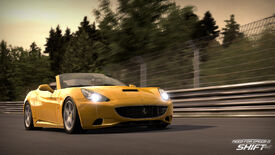