Need for Speed Wiki
Register
Don't have an account?
Sign In
Advertisement
in: Vehicles, 1990s, Ferrari,
and 13 more

It was unveiled at the 1994 Geneva Motor Show, and was quickly propelled as a new-age sports car; fitted with a 5-valve per cylinder 3.5-litre V8 and electrically controlled suspension, leaving behind the 348, of which it was revised from.

The new 5-cylinder Ferrari Dino engine had a new head design over previous iterations of the engine, allowing it produce more power through the improved intake and kept lightweight through the use of a forged titanium alloy.

The electronic control servos fitted to the tubular steel monocoque sub-frame, allowed the F355 to be toggled by the driver between two damper settings; 'Comfort' and 'Sport'.

Through five year production of the F355, multiple variations were developed, such as the F355 Spider in 1995, a convertible with Ferrari's first electric powered soft-top; the F355 GTS in 1995, a targa top with a removable panel roof; the F355 Challenge in 1995, a race-ready dealer kit with a roll cage and various racing components; and the 100 unit limited run F355 'Serie Fiorano' in 1999, a limited production run revision of the race-ready Challenge.

In 1997, the Berlinetta and Spider were offered with a Formula 1 derived gearbox - the first of its kind for a road car. Dubbed the 355 F1 and 355 F1 Spider respectively, they were similar to their F355 counterparts, but included a shorter and faster shifting gearbox with steering wheel paddles.

The stock Enzo is a classic sports class car that requires 40 legendary blueprints to unlock. The blueprints required to unlock the vehicle can be found from various sources; 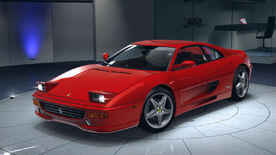