It was introduced at the 2005 Frankfurt Motor Show and was built to compete in the Ferrari Challenge series as a replacement for the Ferrari 360 Challenge.

The Ferrari F430 Challenge is used exclusively in Ferrari Challenge races after replacing the 360 Challenge.

Its transmission is sourced from Ferrari’s Formula One racing program and has the same 150 millisecond shift times as the street-legal F430. The fifth and sixth gears have been tweaked with the final drive ratio to provide a stronger transmission for racing.

It keeps the classic look which has made the F430 such a desirable collector’s item. The stability system along with traction control are both permanently disabled in the Challenge model as well as having no carpets, radio or seats to cut down on weight.

Some other racing gear in the Challenge includes a full roll cage, racing harnesses and a detachable racing steering wheel.

The F430 Challenge appears in Need for Speed: Shift as part of the downloadable Ferrari Racing Pack for the Xbox 360 release. 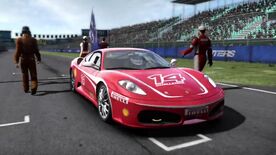