It is based off the elegant Modena line and was a strong finisher in several championship races, notably taking second place at the 24 Hours of Daytona in 2003.

The F430 GTC continues on the track set by its predecessor but there are some noticeable differences such as its more aggressive styling that harkens back to the unique ‘shark nose’ Formula One racers of the 1960s.

Its rear end is styled similar to the Enzo supercar with bulging tail lights giving off hints as to where engineers got their inspiration. Its V8 engine has had its displacement reduced to 4 litres from the 4.3 litres of the road car.

The F430 GTC's total weight gives it an impressive 0.39 horsepower/kilogram ratio. Its weight is the minimum allowed to compete in FIA GT2 races. The major cosmetic differences between the GTC and standard F430 is the large rear wing as well as carbon fibre gills on its front fascia.

The GTC has scored class championship victories in the American Le Mans Series and FIA GT, in addition to class victories at the 12 Hours of Sebring, 24 Hours of Le Mans and Petit Le Mans races.

The F430 GTC appears in Need for Speed: Shift as part of the downloadable Ferrari Racing Pack for the Xbox 360 release. 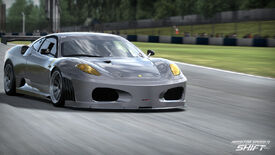