Under the hood is a Ferrari/Maserati joint-venture 4.3-litre V8 engine that kicks out 483 horsepower. This engine marked the beginning of a new era for Ferrari as it was the first engine that didn't share the classic ‘Dino’ setup which began in the 1950s.

The 430 had big shoes to fill in both design and performance as it was the successor to the highly-successful ‘360’ line.

The Spider shares the same door panels, roof, front windshield and aluminum chassis that were originally designed for the 360. One small difference in the F430 chassis is the addition of some stiffening beams in the floor pan.

It also borrowed slightly from Ferrari’s beloved Enzo supercar as the tail lights and interior vents make reference to the Testarossa by carving its model name in the drivers’ side mirror. It also has large oval-shaped openings in its front bumpers reminiscent of Ferrari’s Formula One racers of the 1960s.

The F430 Spider appears in Need for Speed: Shift as part of the downloadable Ferrari Racing Pack for the Xbox 360 release. 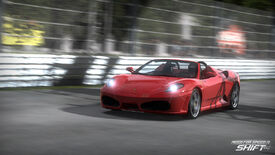