Need for Speed Wiki
Register
Don't have an account?
Sign In
Advertisement
in: Vehicles, 1990s, Ferrari,
and 13 more

The F50 GT visually differed from the road car with an air intake on the roof, a new rear spoiler with central strut, and a new rear diffuser. Apart from visual differences, the F50 GT used a more powerful version of the standard engine, a clutch with carbon-fibre disks, and a sequential gearbox.

Co-developed with Dallara, the car was initially planned to be used in the BPR Global GT Series. However after the initial testing at Ferrari's facility in Fiorano, the plan was scrapped and only 3 units, including 1 prototype were produced.

The F50 GT appears in Need for Speed: Shift as part of the downloadable Ferrari Racing Pack for the Xbox 360 release. 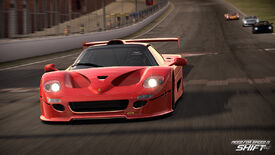