Need for Speed Wiki
Register
Don't have an account?
Sign In
Advertisement
in: Vehicles, 2000s, Ferrari,
and 12 more

It was built solely to compete in single-make races and in Ferrari's own testing programmes. Only 30 exemplars of the FXX were built.

The last FXX built was gifted to racing driver Michael Schumacher. His FXX has a unique black body, red-trimmed wheels, no racing stripes, and Schumacher's personal logo stitched on the seats.

It made an appearance on the television show Top Gear in which it outran the fastest car at the time - the Gumpert apollo s - around the Top Gear Test Track. The time was later removed as it was not a road-legal vehicle and hence didn't meet the requirements to be on the lap time board.

The FXX appears in Need for Speed: Shift as part of the downloadable Ferrari Racing Pack for the Xbox 360 release. 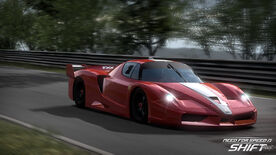