1585 kg (3494 lbs)
The Ferrari LaFerrari (F150) is a hybrid hypercar from Ferrari as the successor to the Ferrari Enzo, unveiled at the 2013 Geneva Auto Show. Only 499 units were produced at Maranello, Italy.

Furthermore, this is supplemented with a kinetic energy recovery system (HY-KERS) unit that produces 161 bhp and 148 lbf-ft. This combines to 949 total horsepower and 664 lb-ft of torque.

It was designed by Flavio Manzoni under Ferrari, and the body computer system was developed by Magneti Marelli Automotive Lighting.

Need for Speed: No LimitsEdit

The LaFerrari was added to Need for Speed: No Limits as a hyper class car that cannot be visually modified following an update released on December 21, 2015.

The stock Ferrari LaFerrari is a hyper class car that requires 60 legendary blueprints to unlock. The blueprints required to unlock the vehicle can be found from various sources;

The LaFerrari appears in Need for Speed: Heat following an article, revealing it to be part of the game's official car list, was published[1][2] on August 19, 2019, and appears in the NFS: Heat Studio app as part of container 8, which was released on October 8, 2019.

The stock LaFerrari can be unlocked in Need for Speed: Heat. 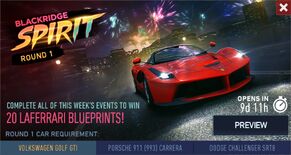 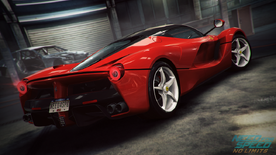 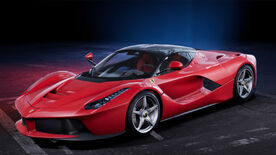 Retrieved from "https://nfs.fandom.com/wiki/Ferrari_LaFerrari?oldid=134382"
Community content is available under CC-BY-SA unless otherwise noted.