Need for Speed Wiki
Register
Don't have an account?
Sign In
Advertisement
in: Vehicles, 1980s, Ferrari,
and 12 more

One of the most recognisable features of its Pininfarina design are the long side strakes, made to comply with laws given the large size of the side intakes providing air to the side-mounted radiators, whose position made the car wider at the rear than at the front. They also improved on shortcomings of the 512 BBi's front mounted radiator design, such as luggage space and cockpit heat.

Its name references the successful Ferrari 500 and 250 Testa Rossa series, with the name "Testa Rossa" being Italian for "Red Head", referring to the colour in which the camshaft covers were painted on sports racing models.

Powered by a rear-mid, longitudinally mounted engine, the Testarossa is the first Ferrari flat-12 road car to be fitted with a four valves per cylinder configuration, capable of producing 390 bhp at 6300 rpm for European models, and 380 bhp at 5750 rpm for US market models.

7,177 units of the Testarossa were produced for seven years with few visual alterations, and the model was succeeded in 1991 by the 512TR.

The Testarossa Coupé '84 appears in Need for Speed: Heat following an article published[1][2] on August 19, 2019, revealing it to be part of the game's official car list, and appears in the NFS: Heat Studio app as a secret car as part of container 9, which was released on October 15, 2019.

It has a customisation rating of two and has "Icon Car" status, meaning it has limited body customisation options but can be equipped with performance parts. 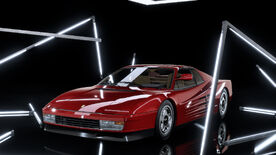 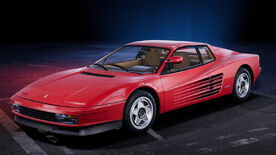