Need for Speed Wiki
Register
Don't have an account?
Sign In
Advertisement
in: Vehicles, 2000s, Fiat,
and 13 more

Critics value the Fiat Grande Punto as an vast improvement compared to earlier Punto generations in terms of quality and reliability.

The Grande Punto appears in Need for Speed: Most Wanted.

It has precise handling, and can be competitive against stronger vehicles by extensive upgrading, but has a somewhat low top speed in the later stages of the Career mode.

Due to its small size, it can pull off quick manoeuvres with the use of Speedbreaker in pursuits although its size and mass mean that it can be insufficient for ramming police vehicles.

The stock Punto is available from the beginning of the Career mode.

It can be purchased in the Career mode from a Car Lot for 27,000 cash, and it can be selected for customisation in My Cars.

A custom Punto is offered in the Challenge Series and can be driven in two events: 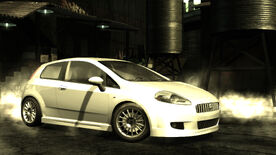 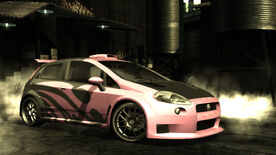