1536 kg (3386 lbs)
The Ford Falcon (EL) is a full-size car that was manufactured by the Ford Motor Company of Australia between 1996 and 1998. It is powered by a 4.0L straight six engine. The Falcon (EL) served as the final chapter of the fifth generation E-series architecture, which began with the EA of 1988.

Ford discontinued the car in 1998, and replaced it with the AU. In its lifetime, the EL was one of the most popular Falcons produced; Ford sold more EL models over two years, than it did AU models over four years.

The Ford Falcon (EL) appears in the PC release of Need for Speed III: Hot Pursuit as a police vehicle. It can only be encountered patrolling the Atlantica and Aquatica courses. 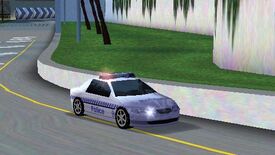