The Falcon GT is powered by a 5.0 litre Tickford V8 and was available with a five-speed manual or a four-speed automatic gearbox.

The Ford Falcon GT appears in the Australian release of Need for Speed III: Hot Pursuit as a class C car and is featured with a showcase.

In its class, the Falcon GT has similar acceleration to the HSV GTS (VT). This trait makes the car also capable of competing with several class B cars such as the Chevrolet Corvette. 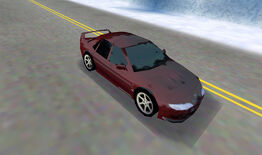 Retrieved from "https://nfs.fandom.com/wiki/Ford_Falcon_GT_(EL)_(Gen._5)?oldid=140205"
Community content is available under CC-BY-SA unless otherwise noted.