Need for Speed Wiki
Register
Don't have an account?
Sign In
Advertisement
in: Vehicles, 2010s, Ford,
and 13 more

The 2010 Ford Focus RS500 (Gen. 2) is a limited production run model of the second generation Focus. Only 500 models were built, all in matte black.

The RS500 uses a more powerful variant of the turbocharged inline-five engine of the standard Ford Focus RS model. It received several upgrades such as ECU tweaks, a larger intercooler and an uprated fuel pump.

The Focus RS500 appears in Need for Speed: Most Wanted (2012) as an Everyday class vehicle.

It is made available to all players at SpeedLevel 1 in multiplayer, but in single player it must first be discovered at one of its various Jack Spots.

Being of a hatchback design, it has fairly average performance statistics with control and off-road being its highest rated attributes.

It has moderately slow acceleration due to it being fairly heavy for such a small car and continuous driving mistakes will allow for vehicles to quickly catch up. This is worsened by its slow to respond first gear and obligatory loss of momentum when traversing uphill. At moderate speeds it can easily change direction making it useful for evasion in takedown battles as well as being capable of performing J-turns.

The RS500 excels most off-road as its rigid body, grip and wheel base give a perky edge over other vehicles. It can slide between high-powered vehicles and quickly change direction to avoid larger off-road vehicles. It's capable of making many jumps but requires a great deal of leeway for stunt orientated events.

At high speeds it can be easily controlled and slip through traffic well but all with a small amount of understeer. The high mass of the RS500, teamed with its responsive steering and rigid chassis, means it can take on other vehicles of a similar body type as well as more fragile vehicles. It will struggle against larger vehicles and more resilient body types.

The Ford Focus RS500 appears in the mobile release of Need for Speed: Most Wanted (2012) in the Everyday category. Available for $25,500, the Focus RS500 has decent speed and acceleration with its strengths in handling.

The Focus RS500 2010 appears in Need for Speed: Edge with an S class performance rating. 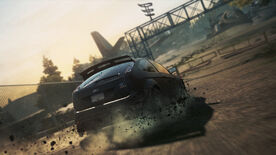 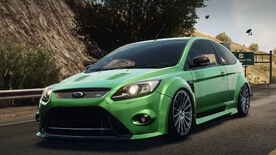 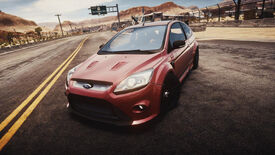