Need for Speed Wiki
Register
Don't have an account?
Sign In
Advertisement
in: Vehicles, 2000s, Ford,
and 15 more

The Focus ZX3 was produced alongside a high-performance SVT variant for the North American market.

The Focus ZX3 appears in Need for Speed: Underground and is unlocked in Underground Mode event #8 - "Atlantica Challenge".

It shows above average acceleration compared to other hatchbacks and also handles well, but is only able to reach a moderate top speed.

The Focus ZX3 appears in Need for Speed: Underground 2 and is one of the cars that are available from the beginning of the career mode.

It has average acceleration, however, its handling is well suited, making it one of the fastest cornering Stage 1 cars, but its biggest drawback is its low top speed.

Being best used in Circuit, Street X, and Drift, it is capable of high-speed cornering. When fully upgraded, it also becomes competitive in Drag.

The Focus ZX3 appears in Need for Speed: Underground Rivals and can be purchased for $18,000. 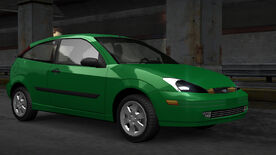 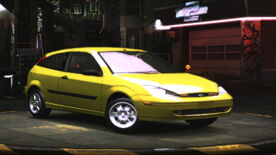 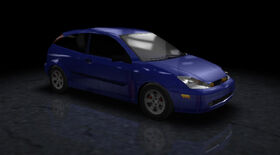