Need for Speed Wiki
Register
Don't have an account?
Sign In
Advertisement
in: Vehicles, Cars, Concept,
and 12 more
English

It was built by a small team in under six months using many components from other companies owned by Ford at the time. It utilised a monocoque chassis, double wishbone suspension, and a 5-speed manual transmission from the Jaguar XJ220.

Its quad-turbocharged DOHC V12 engine was crafted by welding two Modular V8 engines which were cut to have six cylinders each, on to which Garrett turbochargers were added.

The GT90 was shown in January 1995 at the Detroit Auto Show. The car's engine produces 720 horsepower and allowed the car to reach a top speed of 235 mph.

The car's exhaust system was claimed to be hot enough to damage its body panels, and as a result, the GT90 had to be fitted with ceramic tiles similar to those on the space shuttle in order to stop the car from melting.

Its design was the first display of Ford's "New Edge" design philosophy, although it also contained elements from the GT40's styling such as the roof cutting doors. It was crafted around a honeycomb-section aluminium monocoque with its body panels moulded from carbon fibre.

The GT90 concept car appears in Need for Speed II as a class A car. It also appears in the demo release of the game.

It has the highest power output of any car in the game, but is very difficult to control through corners. 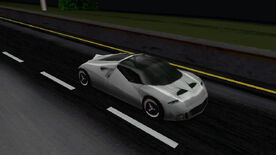