Need for Speed Wiki
Register
Don't have an account?
Sign In
Advertisement
in: Vehicles, Cars, Ford,
and 18 more

Its production marks fifty years since the GT40 Mk. II won the 24 Hours of Le Mans in 1966, as opposed to the production of the first generation GT, which entered production in 2004 as part of Ford's 100th anniversary celebration.

Entering production in December 2016, the GT is aimed with a schedule of 250 cars per year with Ford's assembly facility in Markham, Ontario, Canada.

The 3.5-litre twin-turbocharged EcoBoost V6 and stylised body were incorporated into the GT's design to better facilitate its racing ability. It is not a road car that has been adapted for racing, but rather a racing car that has been tweaked as little as possible to become road legal.

Racing was at the foremost point of the GT's design, and was evident with its entry into the 24 Hours of Le Mans in 2016 within the GTE-Pro class, which was announced a year prior at 2015's event. The #68 Ford GT LM GTE-Pro finished 1st and its victory coincided with 50 years following Ford's win against Ferrari.

The GT appears in Need for Speed: No Limits as part of the "Lights, Camera, Traction" special event that took place from September 22, 2017 to September 29, 2017. The starting performance rating is 693.

The stock Ford GT (2016) is a super class car that requires 60 legendary blueprints to unlock. The blueprints required to unlock the vehicle can be found from various sources;

The GT appears in Need for Speed: Payback following a brief appearance in the Official Story Trailer trailer[1] released on October 12, 2017.

It is unlocked for purchase from the drag, drift, and race class dealerships upon completing three questlines in chapter 5 - High Stakes.

The GT '17 appears in Need for Speed: Heat following an article published[2][3] on August 19, 2019, revealing it to be part of the game's official car list, and appears in the NFS: Heat Studio app as part of container 4, which was released on September 10, 2019. 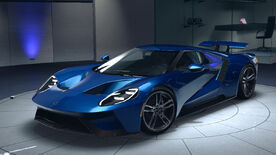 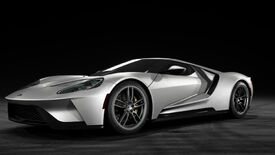 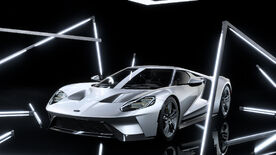 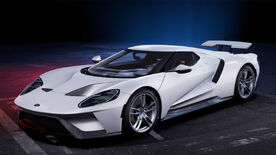