Need for Speed Wiki
Register
Don't have an account?
Sign In
Advertisement
in: Vehicles, 1990s, Ford,
and 13 more

Taken from concept to reality in six months with the help of England's Reynard Motorsport, the Indigo draws heavily on both Indy and Formula 1 car design in its construction. Some of its distinctive characteristics are mirror-mounted fiber optic based headlights, scissor doors, and black leather cockpit which takes cue from Formula One cars, having gear shifting buttons on the steering wheel, four-point harness and F1-styled instrument display.

The Indigo is powered by a rear-mounted 435 bhp V12 engine which brings 75 percent of the car's total torque at 1000 rpm.

The Indigo appears in Need for Speed II as a bonus car. It is unlocked upon winning the Tournament event or by entering a cheat code - "lilzip" on PlayStation, and "redracer" on PC.

One of the fastest cars in the game due to its low weight and chassis, it has a firm handling but lacks in terms of top speed.

In the Special Edition re-release it is a regular car available from the beginning, and grouped in Class B alongside the Isdera Commendatore 112i, Italdesign Nazca C2 and Jaguar XJ220. 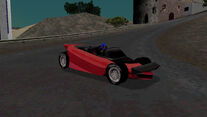 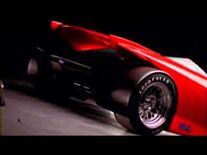 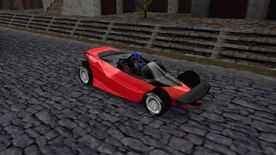