Need for Speed Wiki
Register
Don't have an account?
Sign In
Advertisement
in: Vehicles, 2010s, Ford,
and 27 more

It is a track-oriented version of the Mustang trim based on the 2011 Mustang GT. The 5.0L V8 features CNC ported cylinder heads, revised steering system and camshafts, and a high flow intake which was previously only fitted to the 302R race car.

The Boss 302 is fitted with the suspension seen on the 2011 Mustang GT but with higher-rate coil springs, stiffer bushings, and a larger diameter rear stabiliser bar. It also has a lower ride height, sport mode traction control, and revised stability controls.

The 2012 Boss 302 also had its own high-performance variant in the form of the more exclusive Laguna Seca Edition. It had an aerodynamic package which is a near direct copy of that of the Boss 302R race car. In addition, it sported further modifications such as the removal of the rear seats and optional equipments, as well as further stiffened body and suspension.

Like the first Mustang Boss 302, it was on sale for two years before production ended.

The acceleration of the Boss 302 is up to par with other high-performance A class cars such as the Lamborghini Murciélago LP 640. It has a decent nitrous boost. Its handling feels responsive although the car will easily slide under hard cornering. Top speed is 192 mph (309 km/h).

The Boss style is a Cop Edition car that costs

The Drag King style is a drag car that costs

5900. It was released on October 5, 2013, and is based off of Karol Monroe's Ford Mustang GT featured in Need for Speed: ProStreet.

The Mustang Boss 302 appears in Need for Speed: The Run as a Muscle class car.

Its inclusion was revealed with the "Most Wanted Challenge Series" trailer released on September 21, 2011.[2]

The stock Mustang Boss 302 is unlocked from the beginning of the game.

The "ED" Signature Edition Mustang Boss 302 is unlocked upon the player defeating Eddie Cooke in Stage 10 of The Run.

The "Razor" Signature Edition M3 GTS requires the Most Wanted pack and is unlocked upon the player achieving a Gold Medal in all "Most Wanted" events in the Challenge Series.

The Mustang Boss 302 appears in Need for Speed: Most Wanted (2012) as a muscle class vehicle.

As a muscle class vehicle, it is up to par with the Bentley Supersports ISR and Chevrolet Camaro ZL1 in the terms of acceleration, but the main drawback of the Boss 302 is its handling which makes the car understeer at high speed. However, drifts are easy to perform provided that the player brakes during corner entry.

It can withstand collisions well in pursuits due to its durability.

The Mustang Boss 302 appears in the mobile release of Need for Speed: Most Wanted (2012) in the Muscle category. It costs $60,000 and has the same stats as the Chevrolet Camaro ZL1; a focus on acceleration but with a low handling rating.

The Mustang Boss 302 2012 appears in Need for Speed: Edge with an S class performance rating. 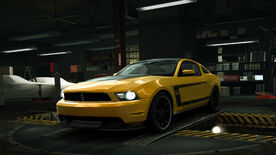 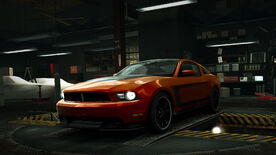 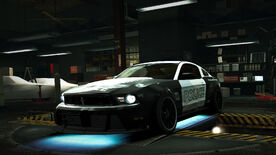 Need for Speed: World
("The Boss") 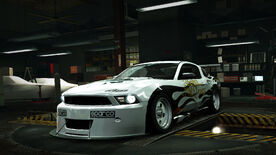 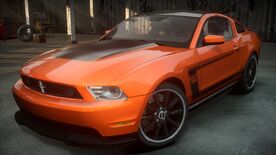 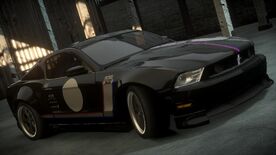 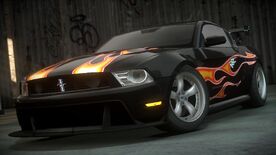 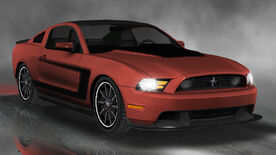 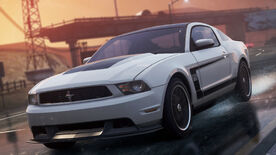 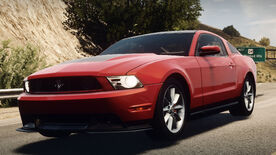 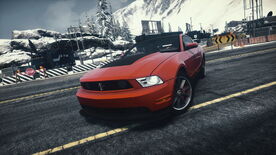