Need for Speed Wiki
Register
Don't have an account?
Sign In
Advertisement
in: Vehicles, 1970s, Ford,
and 11 more

It was conceived to fulfil Ford's need to homologate the 429 semi-hemispherical engine for NASCAR racing, although the Mustang's engine compartment was not wide enough to accommodate the massive engine, prompting Ford to contract Kar Kraft to modify 4-speed Cobra Jet Mustangs to accept it.

The large big block engine made it nose heavy, and to counter this, the battery was relocated to the trunk and a 3/4" sway bar was added to the rear end to limit body roll. For better ground clearance, the front spoiler was made shallower than the Boss 302.

The Mustang Boss 429 appears in Motor City Online as a muscle class car. 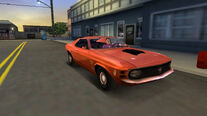