Need for Speed Wiki
Register
Don't have an account?
Sign In
Advertisement
in: Vehicles, 2000s, Ford,
and 10 more

The Mustang GT appears in the PC, PlayStation 3, and Xbox 360 releases of Need for Speed: ProStreet as a tier 2 car with a price of $23,000. Players must dominate the Showdown: Chicago event to unlock it. It is not featured in the Nintendo Wii and PlayStation 2 release.

It can keep up with most tier 2 cars in terms of acceleration. Handling-wise, it performs averagely, but may be surpassed in corners by lighter tier 2 cars.

The V8 engine cannot be upgraded to horsepower numbers greater than 600. Because of this, it may be slower than similar cars in Drag and can only achieve Quarter Mile times between 8 and 9 seconds as maximum.

However, the rear-wheel drive layout and acceleration make the Mustang GT a useful car for Drift events. 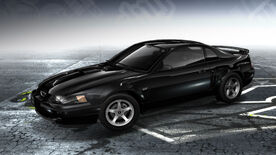