Need for Speed Wiki
Register
Don't have an account?
Sign In
Advertisement
in: Vehicles, 2010s, Ford,
and 26 more

6-speed Automatic
1,916 kg (4,224 lbs)
The 2010 Ford Police Interceptor Sedan Concept is a concept car produced by the Ford Motor Company based on the Taurus platform. It entered production in late 2012.

It is powered by the same 3.5L Ecoboost V6 that powers the Taurus SHO and has an AWD layout. Both sides of the car feature vinyls that say "Police Interceptor" along the body against a black body paint.

Its grille is similar to the Crown Victoria Police Interceptor. It also uses 18 inch rims with centre caps; the interior has a console that has the word police on both sides and other police equipment.

The Police Interceptor Sedan Concept was made available in Need for Speed: World on February 5, 2013 as an A class car. A promotional rental code was released for all players on March 2, 2013, and allowed them to lease the vehicle for 24 hours.

It is described as sporting a "classic police livery with mean looking bull bars." It also stated to have "functioning cop lights and siren" meaning it is the first non-elite car to have an audible siren as well as the second to have the feature following the Dodge Viper SRT-10 ACR.

The car is best used in Pursuit Outrun as well as Team Escape due to a powerful nitrous boost and high weight. It has relatively good acceleration and is nimble in corners thanks to all-wheel drive. The top speed of the Police Interceptor is 205 mph (330 km/h) and 224 mph (362 km/h) with nitrous activated.

The Sedan style is a cop edition car that was released on February 20, 2013, and could only be obtained via the Car Prize Pack before being made available for purchase on June 16, 2015 as part of the End of the World event.

It is fitted with various tuned quality performance parts from different manufacturers, 2-star Skill Mods, and an aftermarket window tint.

The SCPD unit is unlocked upon the player earning a total of 15,000 cop bounty.

It is a decent police vehicle for players to use in hot pursuits, but may be lacking in Interceptor due to its slow steering.

The Ford Police Interceptor Concept is unlocked in the Wii release after winning a trophy in the Jailing Torrent Tour eliminator event in Chongqing.

The Police Interceptor Concept appears in Need for Speed: The Run as a Muscle class car, se well as a police vehicle for the Chicago Police Department and the Federal Highway Patrol.

The "Off Duty" Signature Edition Police Interceptor Concept is a secret car that can be unlocked by the player as a possible Bonus Wheel reward.

The Police Interceptor Concept appears in Need for Speed: Hot Pursuit Remastered as a car tier 1 vehicle available to cops but is not available to racers.

It has a high top speed and can take a lot of damage, but suffers from its weight through a lacking ability to quickly change direction compared to others in its tier. 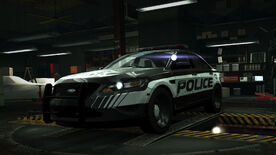 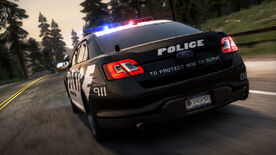 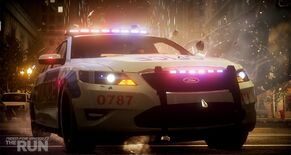 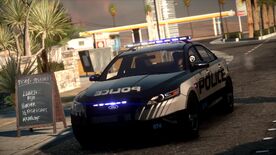 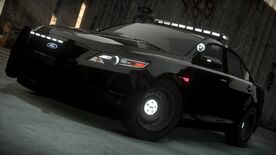