Need for Speed Wiki
Register
Don't have an account?
Sign In
Advertisement
in: Vehicles, Cars, Ford,
and 12 more

The KR's V8 produces 40 more horsepower than the standard one in the 2006 model. The KR also features styling cues from the original 1968 "King of the Road" GT500KR model. The 2008 KR model includes "40th Anniversary" as well as "LeMans" stripes and Carroll Shelby signature embroidered seats.

The '08 GT500KR was featured as the K.I.T.T (Knight Industries Three Thousand) in the 2008 "Knight Rider" television series and television movie.

The GT500KR appears in Need for Speed: Undercover as a tier 2 car.

It becomes available for purchase from the car lot upon the player reaching Wheelman Level 9.5 with a price tag of $169,500.

It is capable of reaching a top speed of 210 mph (339 km/h) and is notable for its quick acceleration. 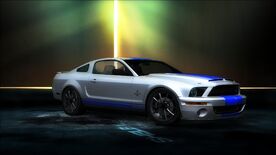 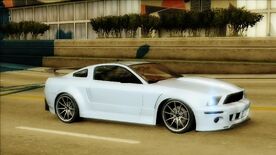