1778 kg (3920 lbs)
The Shelby GT500 is a second generation high performance model of the Ford Mustang built by Ford, but featuring Shelby branding.

It was first presented at the 2005 New York International Auto Show and was produced between 2006 to 2010.

It is assembled in Flat Rock, Michigan and is equipped with a 5.4L supercharged V8.

The GT500 appears in Need for Speed: Carbon as a tier 3 muscle class car.

It was initially only available in the EA Downloader PC release, but was later made available for the Xbox 360 release on December 8, 2006.

Players cannot purchase the GT500 in career mode, as the vehicle is only available for Quick Race use, and can be found under "Custom" in the car selection with either a blue or red body colour.

It is one of the most controllable tier 3 muscles, but might be less powerful than other cars in the same tier, if they are fully upgraded. It also lacks in top speed and has heavy steering causing understeer through corners.

The GT500 appears in Need for Speed: ProStreet as a tier 3 car with the price tag of $42,000. It becomes available for purchase at the car lot upon the player dominating the Showdown: Chicago race day event.

Its agile steering, quick acceleration, and low top speed makes it a great choice for drift and drag events. It may fall short in grip events as it won't be capable of keeping up with other vehicles such as the Lamborghini Murciélago LP 640. 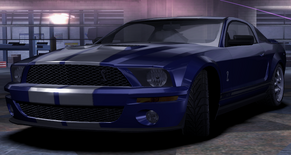 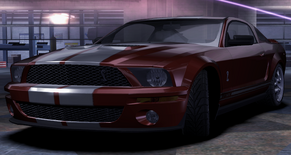 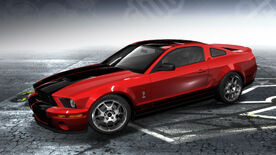 Need for Speed: ProStreet
Retrieved from "https://nfs.fandom.com/wiki/Ford_Shelby_GT500_(S-197_I)?oldid=139144"
Community content is available under CC-BY-SA unless otherwise noted.