Need for Speed Wiki
Register
Don't have an account?
Sign In
Advertisement
in: Vehicles, 2010s, GMC,
and 15 more

6-speed Automatic
2,623 kg (5,783 lbs)
Stub - Why not help by expanding this article with relevant information.

The 2015 GMC Yukon Denali is a high-performance trim of the fourth-generation mid-size SUV manufactured by GMC, and it went to the dealership in 2014 as a 2015 model year.

It shares similar performance to the standard model, with the difference of a modified engine from a EcoTec3 5.3L V8 FlexFuel to a EcoTec3 6.2L V8, as well as being fitted with a honeycomb front grille, a new active noise-acceleration technology, and GM's third-generation magnetic ride control suspension.

In the same year, an XL variant with a wider bodywork was built exclusively in Arlington, Texas.

The Yukon Denali appears in Need for Speed: Heat as a traffic vehicle. 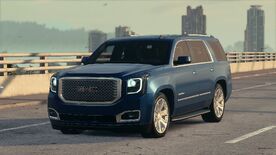