Need for Speed Wiki
Register
Don't have an account?
Sign In
Advertisement
in: Vehicles, 2010s, Hennessey,
and 15 more

The 2011 Hennessey Venom GT is a supercar from Hennessey based on a heavily modified Lotus Exige chassis. It was the first Venom GT model and production was limited to 5 units.

The twin-turbocharged 6.2L LS9 V8 engine of the Venom GT, taken from the Chevrolet Corvette C6 ZR1, delivers 1,200 bhp and 1,150 lb-ft of torque. The engine is coupled with a six-speed manual transmission from the Ford GT.

A revised version and a Spyder variant was introduced in 2012 along with an increase in power output.

The Venom GT appears in Need for Speed: The Run as a Supercar class car included in the Supercar Pack released on November 15, 2011 for the PlayStation 3 and May 15, 2012 for the Xbox 360.

The stock Venom GT requires the Supercar Pack and is unlocked from the beginning of the game. 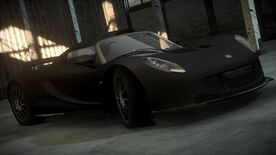