Need for Speed Wiki
Register
Don't have an account?
Sign In
Advertisement
in: Vehicles, Cars, Hennessey,
and 15 more

The Chevrolet Corvette C6 ZR1-sourced LS9 engine had its displacement bumped to 7.0L from 6.2L, increasing the power output to 1,244bhp. It features the same Ricardo 6-speed manual transmission as the Ford GT and other Venom GT models.

The horsepower produced was increased following the 2014 model year.

The Venom GT appears in Need for Speed: Rivals as an RCPD unit and was revealed to be in-game with the Career Progression trailer shown at the 2013 Eurogamer Expo.

The patrol specification of the Venom GT is unlocked upon completing the rank 20 assignment - "It Ends Now".

The undercover specification of the Venom GT is unlocked upon completing the rank 20 assignment - "The Final Test".

The enforcer specification of the Venom GT is unlocked upon completing the rank 20 assignment - "It Ends Here".

The Venom GT appears in Need for Speed: No Limits as part of the "Blackridge Rumble" special event that took place from January 3, 2018 to January 10, 2018. The starting performance rating is 869.

The Venom GT is a hyper class car that requires 60 legendary blueprints to unlock. The blueprints required to unlock the vehicle can be found from various sources: 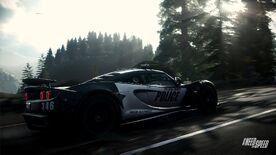 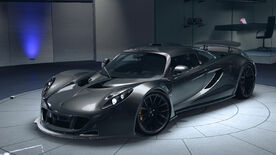