Need for Speed Wiki
Register
Don't have an account?
Sign In
Advertisement
in: Vehicles, 2010s, Honda,
and 13 more

While initially entering the market in Japan, New Zealand, and Australia in 2010, its availability was expanded to Europe and the United States in 2013.

In 2010, it was introduced with the regular CB1100 model, which remained in production until 2018. In 2014, alongside revisions to the CB1100's components, the Deluxe and EX trims were introduced.

In 2018, the standard CB1100 trim was dropped in favour of the EX being the base trim, and followed the discontinuation of the Deluxe trim a year prior with the reveal of RS trim.

The CB1100EX can be found in the game files of Need for Speed: Heat, with various meshes, textures, and configuration assets present.[1] 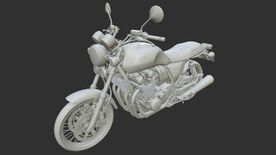