Need for Speed Wiki
Register
Don't have an account?
Sign In
Advertisement
in: Vehicles, 2010s, Honda,
and 13 more

Throughout production of Honda's flagship motorcycle, the CBR1000RR has received numerous redesigns and updates, with significant alterations being highlighted as a new generation.

In 2017, as part of the thirteenth-generation redesign, was a special SP trim was introduced to celebrate the 25th anniversary of the CBR1000's production, and was available until 2020, at which point it was replaced by another redesign; the fourteenth-generation CBR1000RR-R.

As part of the 25th anniversary redesign, it was fitted with new bodywork components, as well as traction control and an electric throttle control being introduced, and its engine was tweaked to produce more power and torque. Other alterations include an Öhlins Electronic Control suspension system, a titanium fuel tank, and Brembo monobloc front brake calipers.

In 2019, the traction control and anti-locking braking systems were altered, and its dashboard gauge arrangement was repositioned.

The CBR1000RR can be found in the game files of Need for Speed: Heat, with various meshes, textures, and configuration assets present.[1] 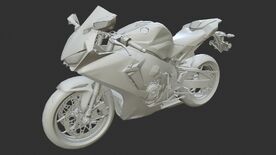