Need for Speed Wiki
Register
Don't have an account?
Sign In
Advertisement
in: Vehicles, Cars, Honda,
and 12 more

It is powered by a 1.6 litre "B16" inline-four engine which was not used on regular Civic models. The engine is notable for its 8,000 rpm redline and special VTEC variable valvetrain system.

The Civic Si appears in Need for Speed: Underground and is unlocked from the beginning. It costs $10,000, making it the most expensive starter car players can choose in Underground Mode.

It has a high top speed thanks to the high-revving engine, although this comes at the cost of acceleration. Handling-wise, the Civic Si performs decently.

Samantha drives a modified White Kitten themed Civic Si, which is obtained by TJ during a later stage in Underground Mode. TJ's car is featured with a slight alteration of Samantha's Hello Kitty livery.

The Civic Si appears in the North American release of Need for Speed: Underground 2 as a starter car.

It is the fastest accelerating Stage 1 car, and is capable of reaching a high top speed. 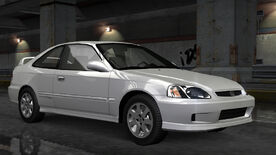 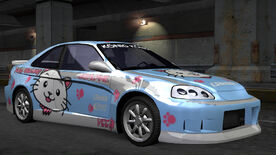 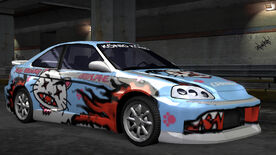 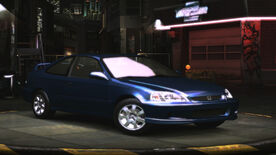