Need for Speed Wiki
Register
Don't have an account?
Sign In
Advertisement
in: Vehicles, Cars, Hummer,
and 11 more
English

[1]
The Hummer H2 is a large SUV that was sold under the Hummer brand of General Motors. It was built on the same platform as the Cadillac Escalade and Chevrolet Tahoe.

The H2 is regarded as a status symbol in popular culture in a similar manner as the Cadillac Escalade and Lincoln Navigator.

The H2 appears in Need for Speed: Underground 2 and is unlocked during Stage 2 of the career mode after completing two URL events.

Due to being the heaviest vehicle in the game, it is the least powerful SUV. It is also prone to understeer in corners, but reaches a higher top speed than the Lincoln Navigator when fully upgraded.

A Capone edition sponsor car that can be unlocked for quick race in the GameCube, PC, PlayStation 2, and Xbox releases Need for Speed: Underground 2. It can be unlocked by entering a cheat code at game's the title screen:

Successfully entering a cheat code will ping a confirmation sound and the vehicle will be available on any loaded profile during that play session, however, any profiles with the sponsor car loaded will need to be saved in order for it to be retained. 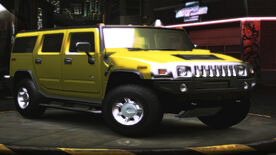 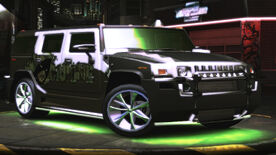